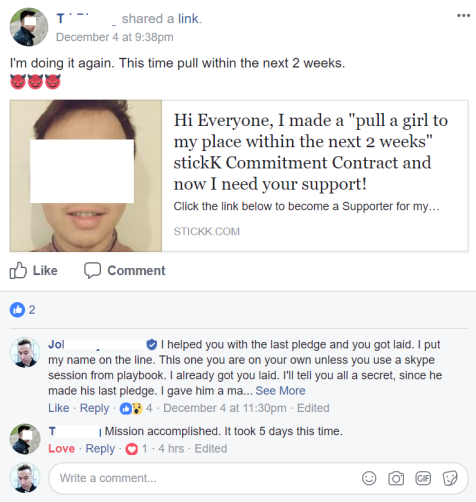 Yeah, he only had one Skype and owns Wayne 30 and Wayne Playbook. He has done his 30 day challenge with my product. I give him some fashion tips like don’t wear that jean jacket. I picked out his bracelets and new jacket with v necks. In two days he got his first same day lay. Now he got his second same day lay in 5 days. Dude is only 5’4 and with my game able to do this. He isn’t the only 5’4 student who can. I had another one who 7 lays in less than two months with white girls. He is also Asian himself. Its pretty consistent and he used to use Justin Wayne products. But not anymore. When he learned my stuff, he gets like 10x the results and efficiency.

Having said that, all the other products failed him. RSD shit, Justin Wayne shit, simple pickup, whatever trash he used. Listen, material beats method. Meaning, even if you think you have the best method in the world though marketing. Some times the right material, like Wayne 30 combined with Wayne Playbook can beat just about anything on the market.

I am having a Christmas bundle. I know a lot of you are spending money on family and friends for Christmas. But don’t forget to get yourself the gift of good game. It only seems my product in this market works and others don’t. This impossible/hardcase student only used Wayne 30 and playbook. He spends the entire month doing Wayne 30. At first he didn’t get laid or pulled. But he had the basic social calibrations or social skills down. When I moved him onto the Wayne Playbook. He layered the game skills on top of the social skills. Now he is getting laid twice in one week and has a fuck buddy. If my programs are so powerful, you owe it to yourself to stop wasting money with stupid programs out there with privileged game that doesn’t work from other companies. Remember, this is the true nature of game. This guy is only 5’4 so his looks is compensated with fashion and hair. Also, his game is boosted higher with Wayne 30 and Wayne Playbook. Imagine there is a battle efficiency rating. Higher it is or more calibrated, the more you will get laid. Wayne 30 boost things more than game.