Didn’t even Skype yet pulls a German girl home, good job after Wayne 30. He lives in Asia. Yes, lots of testimonials coming soon of course. I’m normally flooded with testimonials every week. I’m still going to edit a few more video testimonials and post it secretly on the testimonial page then put it in the blog post.

Realistically he pulled in like 3-4 days max. I said a week before or less than a week. I told him his calibrations were shit. All in Wayne 30: From Hardcase to Hero. Lol, yeah this is a miracle course. I designed it that way, to counter Aspergers kind of syndromes most Asians has. Even if its forced upon them by focusing on school and work over social skills. Not all Asians have Aspergers. If they do, you will know, it goes an extra mile.

I think the students pulling are nearly 82% now thanks to Wayne 30: From Hardcase to Hero. 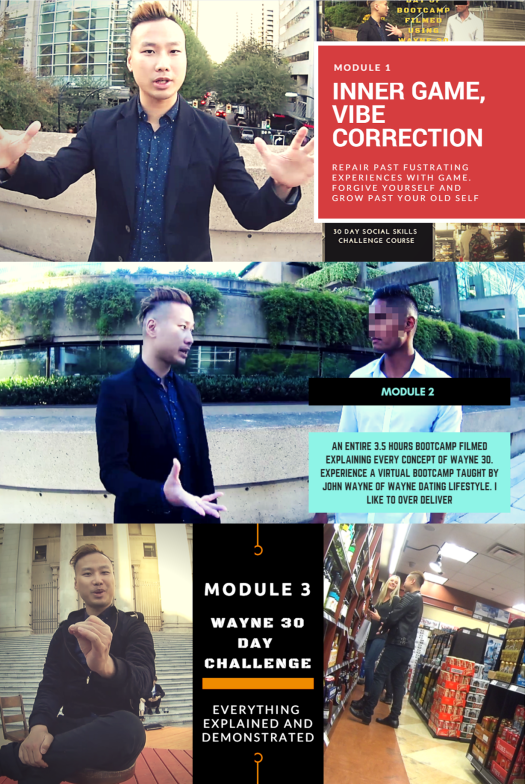 It seems people are here only for the testimonials, not for the advice. But think of cause and effect. What gets the testimonials, my belief system and my field testing data I post on my blog as the truth. Well, 82% truth. Maybe instead of looking at the testimonials. Just say to yourself, most likely John Wayne is right. He seems to get student results almost every single time. Maybe I should consider adopting some of his ideas if they are field tested data and it works. Put my ego aside.

Or you can get no results adopting RSD’s belief. Which is just rooted in marketing, scamming and cult-like mind control? To limit your ability to think. If looks don’t matter, then it limits you to thinking paradigm. That counters John Wayne’s compensation theory of value, which seems to work. Women are attracted to what they are attracted to, which is value. Looks, money, status (ethnicity), game (tactics, personality, social skills). You can’t tell them, I just got to take action, looks don’t matter. Women don’t have this marketing bullshit belief system in their head. They have hundreds of thousands of evolutionary psychology rooted in their minds. No amount of bullshit theories you hear from RSD Max will change any of that.

Anyways 3 months to proficiency is out. It was featured in my last blog post here.

If you want Wayne 30: From Hardcase to hero. I told this guy, it isn’t the next shiny technique or game. It is the social calibrations that are necessary. I told him he kept talking too much, moving his neck, too fucking fast like a machine gun, she can’t contribute to the conversation. No facial expressions, etc. It was all in Wayne 30. If you avoid Wayne 30 tactics, then you will just be a game aspie like mother fucker RSD victim faggot in the field dressed like shit. I told him he dressed like shit, typical of Asians. He didn’t like it at first, but he accepted if I am always getting so many testimonials. He does read this blog. He knows no matter what I say, most likely is correct. He put his ego aside and stubbornness and say now, yes sir!!!

Sorry for insulting your gods at RSD. Actually, I don’t give a fuck. It’s for your own good. Stop watching their free feel good enticing video advice and have a detox. Then you will feel like yourself again and start to think for yourself instead of being mind controlled. Never trust a person who is comforting you and marketing to you with sugar-coated half-truths. Their personality is great, but their characters are a snake, since its all about making money. In the future, I’ll stop this systematic cult from hurting other Asians and taking away their future. If 1 in 5 will never get married or procreate.

Also, this guy reads my site. He always reads my testimonials. Congrats on being a part of one. I told you with Wayne 30, was your biggest issue, not game. This much results so fast, as I told you. Yes, most likely everything I tell you, 82% of it statistically is totally correct. I think this guy will be really good. I see potential.

Online program, click here if you aren’t stubborn or a RSD victim.