Umm, usually when I hear this shit, I know its a hardcase who sucks with women 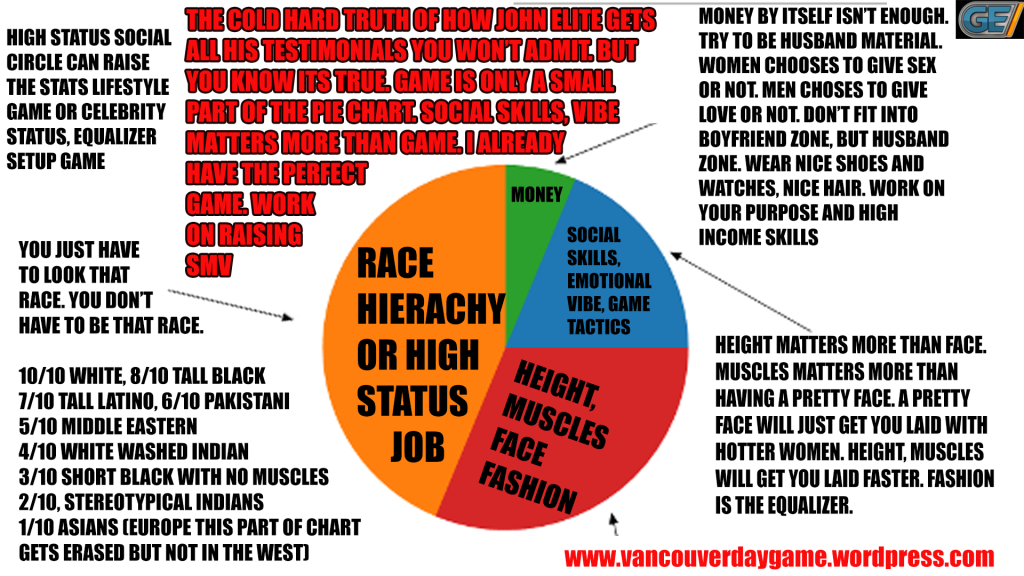 Let me ask a series of questions

If things are win/win, what makes you think you bring enough value to a 8+ women?

Doesn’t that mean you are a value taker? Win/lose? you bang her, she loses you win? Shouldn’t you make it a win/win?

Also if you claimed you banged 8+ and are hardcase, could she just be a 7/10 and you a 7/10? So its actually outside the delusions the same scale?

Isn’t when a narcissistic delusional PUA says he bangs hot women. But when he post it, you compare the two. They look like brothers and sisters on the same scale? Then they say sorry John, my bad? I see it now?

Is it harder to distort the picture because the left brain painted her as being higher on the looks scale?

Shouldn’t you work your way up? I’ve banged ugly women and it gradually increased over time to hotter. Are you skipping steps?

Aren’t 8+ or whatever already has looks? Shouldn’t they focus on status for evolutionary psychology?

Aren’t a lot of them into seeking arraignment sites for this reason? Hot women?

Even if you wanted a relationship with them, don’t you need to have a stable lifestyle? An alpha provider to some degree?

When PUAs tells you money doesn’t matter its all looks. Or all game, isn’t that some aspergers level of thinking?

2 Pakistani Mentors And John Elite. What strategy should I use John?

The 5’4 guy was suppose to come today and teach me everything he knows before he moves to a different part of Canada. I was too tired. I’ll meet on Thursday. I want to complete the last part of my game. Its already a 9/10 game, but I need the .5 percentage from him and the taller mentor. I’ll be hanging around the taller guy.

The better question is what do all 3 of us have in common? Perhaps our similar traits is something that people should copy???

-We all have banged some hot women, 8+

This is the truth, they all admitted it.

If there was a formula and someone asked John how would you do this. My answer.

–ALL 3 OF US HAS NO RESPECT FOR WOMEN IN OUR MINDSET. We have different vocal tonality, but none of us care.

Yes none of us care what the women thinks.

I even treat women like puppies. Seriously. I’m not joking,

their bark is worst than their bite.

-all 3 of us are absolutely ruthless.

-ALL 3 OF US WEARS EXTREMELY EXPENSIVE SHOES

I looked at our shoes, I wear Versace, My shorter Pakistani Mentor wears Gucci and my taller one wears Armani.

What the fuck does that tell you about shoes?

Even if you wear Zara outfits and wear nice watches. Doesn’t that tell women that you are wearing nice clothing but can’t afford nice shoes? Doesn’t that give it away?

Is it because you don’t have the self esteem and too high of an ego to invest in yourself?

Imagine you said to your future girlfriend, I can’t afford you so I will take you to cheap dinners. Wouldn’t that be the same as the way you talk to yourself wearing shitty shoes??

Doesn’t women watch shoes because its one of the signs that is a big give away to your income level and wealth? Shouldn’t you exploit this weakness in her brain?

ISN’T IT OKAY TO WEAR FAKE SHOES THAT LOOKS REAL?

-WE ALL HAVE A HIGH EMPATHIZE ON FASHION

-I wear Zara stuff that is based on the best of the other brands. In fact Zara looks way better than more Versace stuff and Armani in my experience.

If they steal all the good designs and shoes, just go to Zara. Zarafy your version of everything.

The shorter guy wears more of the Versace jackets with those designs and Gucci.

The taller guy wears more expensive real stuff, he pays full price with. Less flashy but hotter women knows somehow. They can figure it out.

The biggest problems with people with mental blocks about fashion. If you don’t love yourself enough to dress well or have the self esteem. Or you don’t make a lot of money. It means don’t have self esteem.

WE ALL HAVE A HIGH EMPATHIZE ON SEDUCTION

Most dating coaches are about teasing or self amusement or cocky funny for white dating coaches. Rarely do they realize they have to build some sort of flirting or seduction.

I flirt directly, the short guy flirts indirectly, the taller guy flirts though text game. He deals with objections and creates conversions there from daygame. That is his strength.

But one thing we have in common is all of us flirts or uses seduction at some point of our game.

Most people are like oh flirting, isn’t that like cocky funny or something? Is that a flirt?

ARE YOU STUPID OR SOMETHING?

Some people can’t flirt. They don’t have the emotional intelligence for it.

Some people have mental illnesses, where they go though the motions.

ALL NATURALS FLIRTS, DATING COACHES ARE INTO COCKY FUNNY SPICING SHIT. DO BOTH.

MOST PEOPLE SAID I FLIRT ONCE OR TWICE. DUDE, DO IT LIKE 20X, WHEN SHE INVEST IN THE CONVERSATION.

YOU DON’T KNOW WE ARE PUAS, WE ARE LIKE NATURAL

That is another thing in common. You never see us approaching much. We look like normal people. We don’t stand like PUAs.

Some will put a bag in their hand. We all do that sometimes.

I pretend I accidentally just walked here and the meet was accidental.

The other guy well, you wouldn’t know. We are all like ninjas really. Social stealth.

THIS TAKES A HIGH DEGREE OF SOCIAL INTELLEGENCE.

That’s basically what you want to focus on. Improving these areas.

When you break it down, it just comes to social intelligence, social skills, emotional intelligence and raising your value or SMV.

NO AMOUNT OF SALES OR PERSUASION WILL HELP YOU IF YOU ARE A LESSER PRODUCT.

You want to understand these concepts further. You want to expand your game?

JOIN THE NEW INNER CIRCLE FACEBOOK GROUP. ITS CHEAP BUT YOU GET 100X THE VALUE.

REQUIREMENTS I HAVE TO KNOW YOU ON FACEBOOK AND WE TALKED BEFORE.

I HAVE TO APPROVE OF IT, OTHERWISE KEEP YOUR MONEY AND FVCK OFF SOMEWHERE ELSE.

LETS SEE IF YOU QUALIFY

For those in the course taking monthly, seeing how good the course, contact me for a yearly membership.

I’ll also loosen up the restrictions on applying. You don’t need to add your paypal info to it yet. But I have to know you from facebook. Check out the offer.

I ultimately choose who I train or don’t train.