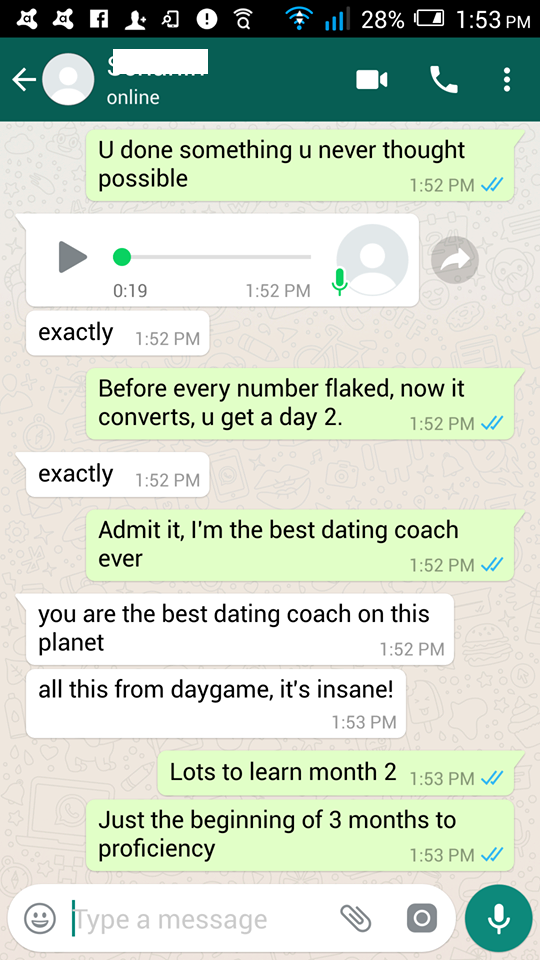 My second middle eastern european student pulled. Right at the end of month 1 of his 3 months to proficiency program. He got a haircut, for those who questions my fashion sense which seems to work over and over again. He used to be a camera man for Simple Pickup’s Willy Beck. Also, occassionally RSD Max. He said Willy had to make 150 approaches just to get a date with a medicore girl. He gave me that screenshot as proof. White privledged people can’t teach minorities daygame. This student had been flaked on and never had a number converted for 2 years. He came to me for help, his number converted just like my other 3MP students. Also, he pulled her.

This student has a good heart and won’t ever betray me unlike the last. Unlike the last student, this guy is going to most likely get laid. He doesn’t have a snake like vibe. Isn’t it funny how people are? Giving value and taking value. He gives value and these are the things that can’t be taught. A good character. You can fake a personality, wear a mask. But if you are a bad person and snake like, you can’t learn how to be a good person imo.

Deepak Wayne and I had a meeting to create this chart. I wanted to know what needs to happen in order to always create conversions for our students.

Remember this chart? He set the frame and went through my steps in daygame. The number converted in 3 approaches. He never had a single girl come out on a date and all the numbers flaked or went nowhere. Like I said, once again it’s not a numbers game. You can convert it. I have been preaching about how you can create conversions with number closes. Both 3 MP students who are dating smoking hot girls way above their looks scale. They both instadated their girls. They did all the steps and set the frame. Decent comfort too. Look, Deepak and I solved the issue for the world. But it goes to show, you everyone needs to redo or change their daygame systems to facilitate the 6 steps. But they won’t. They will just privledge it with girls below their looks scale.

I taught him the secret of aesthetics. If you saw him before, you never would of known they are the same person.

Before the makeover. This was what he looked like. People can change and optimize themselves. Of course the most important is having our tight game. Listen John Wayne time and time again has no theories. This whole it takes 50 numbers to get a date or some nonsense. Or 11% will come out. No, people are just focused on the wrong things. Or white people have no daygame skills. Night game doesn’t require social intelligence. Listen, stop learning from white daygame coaches. Or privileged fucks, if you are a minority.

I also made a comment we have the most testimonials in the world, more than all dating coaches combined. Yeah, it just keeps pouring in. I have to post a few more edited testimonials too once I censor their faces.

Check out more info for 3 Months to Proficiency. Might be exactly the type of program you are looking for. Also, I updated the playbook with a new video for how to practice. You guys might of seen a new update. People who are more intermediate, should get that product and change your daygame style to ours. Everything we do is field tested. It works, stop wasting time with other daygame systems. Its a science to us with no theories. If you were on the fence, maybe get something. Show the playbook some love. It can use a few more sales this month.

Update, he will continue his month 2-3 later. He is busier now. Since he pulled, I passed him. I was going to fail him for month one. He first came to me buying Wayne 30: From Hardcase to Hero. When he first started, he bought Wayne 30. He couldn’t make the openers work. Until I explained in great detail how the work. Also, I told him he sounded like his cat just died, depressed. I think that really make an impression on him because there was so much depth and science to the system. He was worried he couldn’t pull or get laid. Or even do anything due to previous reference experience with Simple Pickup Willy Beck. He read my blog a lot and knew a lot of my concepts. He tried to reverse engineer it, but he couldn’t. When he learned it, it was like everything finally made sense. The escalation ladder is in month 2. He only learned daygame and text game. But I think that really opened his eyes because now he realized, he can do this. With the right training.

Click here for the online program or products page