I just call it Wayne 30. Later today I am going to upgrade the colors. Its is called color grading. You will have realistic and accurate skintones and shadows. All the colors are basically being redone until it looks perfect for module 3.

I added quite a few new videos for module 1. It is like therapy in a box type of course now. Or a vibe repair course. I think people would really like that. While its audio podcast type of material for module 1. It is still pure gold. For some of the guys with aspergers, they could use it. If people are easy cases, normal, hardcases and impossible cases. I didn’t sell it that well to impossible cases yet, but some are coming around. For hardcases they love it. They couldn’t wait to get it because lets be honest, no one ever built a PUA course like this to suit their needs. So far we sold 18 copies in two weeks the product is out. Here are some early impressions which was interesting. Since i’m collecting field testing data, I’m a scientist of game. 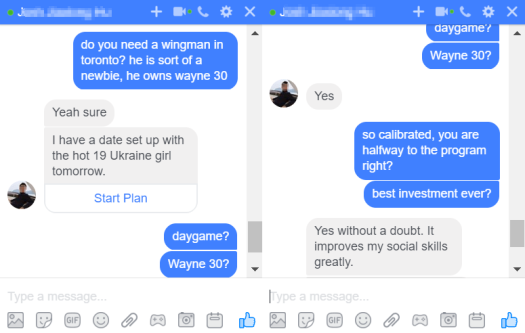 One of my students who was a bootcamp student. He pulled 4 times already. But he didn’t get it in for daygame. He has pulled a lot of night game. He couldn’t hook sets at all when he came to my bootcamp. After the bootcamp, he started to lose his social calibrations. Like how to start a conversation, body language and how not to be gamey. He asked do I really recommend it? He trust me, I said 1000% percent. He is dating Ukrainian girls now who are hot just from daygame. His hook rate seems to dramatically be better too. It solved his problems. While the Wayne Playbook was designed to get you laid. This product was designed to help you calibrate your social skills and hook better.

Second student, actually both were my bootcamp students. They both bought this product because both were gamey. What do they have in common? Both are RSD victims. I’m serious, with the second guy we semi crashed RSD Jefy’s meeting. But I couldn’t yell out Wayne Dating Lifestyle due to the people who got me in there in the first place. Regardless, he is now more calibrated. Another thing in common was besides being RSD victims, both of the guys were Asians. Yes, most Asians in my teaching experience by default needed Wayne 30: From Hardcase to Hero. Yes he pulled on the bootcamp at the last minute. But he had some issues like crossing his arms with girls and squaring off. With our new camera man, old camera man, all the bootcamp students. None of us was able to square off in Vancouver to girls. They just automatically left. We have our own stance we field tested. Like I said, we are a scientific based results based company. Or a proof/results based company. Hes able to date now too. He is dating two girls now with the product.

So the whole idea of white girls doesn’t want to date Asian guys nonsense. Its not true at all. They would if you were more socially calibrated too. Along with a higher level of game. Look these are just early impressions since these guys only been though 1/3 of the product.

This makes a lot of sense too. No matter the amount of game you learned. If you aren’t socially calibrated, it doesn’t mean shit. It really doesn’t.

Another interesting thing was for the people who bought the product. They weren’t just Asians, but every other race. What I noticed was, they can afford the Wayne Playbook when I try to tell them that is another option. But I said this course is foundational and has a 30 day challenge. They chose to do this course first. There are some hardcases out there I told, this isn’t a course for you to get laid. This is a course to recalibrate your social skills. Get some more dates and maybe pull. They are fully aware of it and completely fine. They tell me they need this calibration or foundation first before they learn game.

I’m sorry for the lack of updates, been so busy lately. Too much work. Made quite a bit last month. These Wayne Playbook and Wayne 30 are flying off the shelves. People are buying them up like its the best thing since sliced bread. Some bought both courses together. So they can have their foundational course and their game mastery course together. Tbh, the product is powerful too. Wayne Playbook gave me half my testimonials paired with Skype coaching. Of course there are products out there that doesn’t give anyone results but turns them into victims. Two major company or people comes to mind. You want to mentally masturbate or do you want results.

Both my camera man number 1 and 2 just got laid. One got a blowjob and the other got laid for following my advice. I’ll post their testimonials. I just got it now. Both at the same time. For some odd reason, camera man 2 is getting non stop pulls, blow jobs and lays just from Wayne 30 tactics. At first he was resistance at our stance. Since he used to square up like most direct daygamers. Its all Wayne 30 and Wayne escalation ladder for him and his results. He uses that on dates. He is the first one to pull and get results from Wayne 30. He trained under 12 London daygame coaches. 6 intensely, mega big names. It falls under the learned too many bullshit theories for one of my pictures above. But didn’t get results without using alcohol. He came here to Vancouver to help me out, with my permission. I said why not, help me edit some videos or something. I taught him, after he filmed Wayne 30 so well. I never intended to teach him anything. He just helped filmed bootcamps and also me. He got his foot in the door that way and I gave him tips mentoring him. He just wanted to learn some indirect openers. Lol, he got more than he bargained for. Out of all coaches, i’m the only one who got him non stop results. Like I said, I’ll write their testimonials for the next post.

Truthseeker this truth seeker that. Something I am teaching seems to be working for everyone, negative stereotypes and positive. Its not truthbased or proof based thinking. Its proof/results based thinking. It has to transfer to others. It shouldn’t be something only I can do and other people can’t.

Update Nov 28th, 2017. I never designed for this program to get you laid. But so many people got laid from Wayne 30: From Hardcase to Hero. You may think you know so much about game. But you get limited results. There is a social calibration issue. Just because of how simple it is, its harder to apply. You have to be borderline autistic to think you have it all down. You simply don’t. When I skype people, they often have none of it down.