Maybe you are waiting for the Justin Wayne product. You don’t know if it even leads to any results. Its a grand and will be released at Sept 13th. I’m dropping my infield at Sept 14th. While mine is proven. Or maybe you want to do some campus game getting back to school. Mine gets 80% of my students pulls and 70% of the students laid. I mean my international students got laid using it. Its part of my testimonials. 4 for the price of 3 is a great deal. Normally I charge like $200 usd per skype of an hour of my time. This price for September gives great value. Works out to $100 per Skype and a 16 hour online product included. The most powerful daygame system ever created. 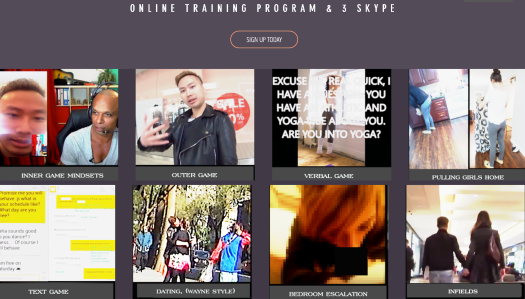 If you want to know more info, click here.

Next product is called Wayne 30: From Hardcase to Hero. Its a 30 day challenge product designed to teach you social skills. Its for Asian guys or East Indian guys with no social skills due to having pressure from parents for good grades at the expense of their social skills. Or guys with some form of aspergers, or comorbidity, or many other types of mental issues that can impair social skills. Of course you might just have anxiety or depression, maybe not to this point. But a lot of my students do have diagnosed aspergers. I am going to be honest, so I can help people. I know its a touchy subject. But i’m here to create a cure to the problem. The point or concept of the program is to give you 5 years worth of social skills in 30 days. You have to actually go out there and apply it. We demonstrate it for you each components. Whether myself, my newer camera man or my last bootcamp student. I sol one copy of Wayne 30: From hardcase to hero, early access to the product so far. I’m accepting early access to the training program. Its already filmed for the coaching part. Not the demonstration part.

If you really really really are a hardcase and need this course badly right now. Like some of other potential students. Just fill out the online form and in the comments section, say you want from Wayne 30: From Hardcase to Hero. If you absolutely need the social skills boost right away and you want early access to the course that is being edited. The infield demonstration is filmed now, but the entire lecture part of the course is already filmed. You will see a firmware update to every new version of the product before we release it to the public.

I want to talk about my student. I saw Tony D Newton teaching for the first time. I shook his hand. He actually extended his hand first and I shook it. He made the first attempt at peace. As long as he doesn’t talk trash about me in the super man group. I think our truce is going to be indefinite. It doesn’t matter, most of my students anyways are from all over the world. He doesn’t seem like such a bad guy. I told him my student pulled twice and one botched attempt. I tried to pull a 18 year old model. This is true, its all documented on video. I didn’t get into her apartment, but I sure walked a long way and dealt with objections. That girl was the most pretty and thin hot 18 year old girl with the nicest body I ever met so far. I’m not talking about super curvy, but that hot look for a 18 year old girl. She is just as cold and manipulative as I am. She told me it was scary because it was like staring into a mirror. I even told her my job. Since I dealt with 50 objections in a row, didn’t over come them. I am starting to think I need to revamp part of the system that no matter how Asian or how much of a negative stereotype, you can over come it. I know there are tall white guys who can over come it with value. They may get 3-5 objections. But I got like 50? still I was able to handle a no girl, but i’m going to spend a month figuring out how to get no girls. I’m not talking maybe no, but no girls. It might involve risking eagerness. We also had another botched pull. I was going to bring two younger girls to the hostel to get a drink. Maybe a dry pull, but student led her to the liquor store screwing things up. Then on the way she claimed her friends are texting her some guy. This was another botched pull that we didn’t get them inside the hostel. We tried afterwards.

Battlefield efficiency concept: Regardless I want to talk about my first student. He was the first of the batch of the summer. I didn’t teach as much sexual spicing or flirting. He had 4 pulls, but 6 pulls total no lays. He is holding back. Later the last student was taught everything. He was focused a ton of flirting and sexually spicing. While I can same day lay, my students are struggling with it a bit in Vancouver. The student found it tough and one of the toughest places around the world on grandville street. I always strive to improve the training. I’m using something called battle efficiency concept. I’m the first to create it or coin it. If its high, I usually get same day lays. If mid level like 50% I pull, lower, dry pull and other ones instadates. I assign a number. Last time I applied it, I had one white student with a higher number. He escalated like crazy. Vs a guy who was more into emotional connection. He was assigned a lower number. What i’m saying is flirt. My efficient isn’t as good as when I was doing same day lays. I didn’t approach as much. Later on I had two botched pulls. Its not up to what it was, but I’m still able to make this much happen without practice for a month.

Regardless, it was weird that my student on day 2 of his bootcamp got rejected by 85% of the girls. He thought it was his vibe. But I taught him everything step by step from beginning to end on day 3. After learning the openers, he got a 100% stop rate. Every girl stopped for him. We even recorded every single open on his phone hidden camera and mine. It was weird, I thought it was impossible. But he was talking to a blonde when I met Tony and pointed out my student. It seems like a statistical impossibility. He still has to send me all the footage before I edit his bootcamp clips. But his efficiency is much higher than my first student. So lets see where this theory takes us. I don’t have theories, its all field testing and I am talking about the data. So for this field testing, it seems if you tap the girl in the arm or shoulder and try to stop her. Its going to make her either very anxious or give positive reactions or eject. I don’t teach that, there is no touching. But from our field testing, it is about levelling. The reason why some girls doesn’t stop could purely be the way she is stopped initially. Not so much the vibe or what you say. I find this kind of strange how much of a cold science this is. Yes everything is a science. All my so called theories, there are zero theories. I’m just reporting what I learned myself or bootcamp students experienced from their field testing. Like using my students as a subject of a game experiment. But it is why we have 80% of our students pulling and 70% got laid. So fix your battle efficiency. I don’t think this will work well with direct game. It levels you down by default. I mean this summer, I had a lot of students. Everyone pulled, got laid, multiple times. Even Skype students did too. Only one guy in a bootcamp didn’t get any results. That’s why I created Wayne 30: From Hardcase to Hero. I needed to address it.

Another thing that bothered me this month when the student was here was, there are no Asian guys with white girls. Zero this bootcamp. Talk about issues with preselection in Vancouver for Asian guys.

I’ll resume the testimonials and stuff soon. Of course I have a lot more to upload, I don’t  have time.