He never dated a girl who isn’t black. He only dated 2 black girls and had two black girlfriends. He had limiting beliefs his dark complexion disqualifies him from other type of girls. Statistically I have the highest student pull rate in the world for a daygame coach. I get averagely 5 of these a day.

I have a Christmas sale till the new year. I am offering my full online course until Jan 1st. I work for Wayne Dating Lifestyle now. So the prices will go up. I can’t sell the course anymore. It was fun being a private dating coach like the Asian Hitch privately. Then going publically lately. But now i’m part of a bigger team of people I highly respect.

Technically this still counts as a pull. Not f-close. This still counts towards the 75% average my student gets. Then again, do other students in daygame schools gets results like this? Nope.

My other student pulled and f-closed. The Latino guy you see on my youtube channel’s testimonial. He f-closed the other HB 8.5/10 Latina twice now. On top of f-closing the 6’2 blonde. Good job guys. 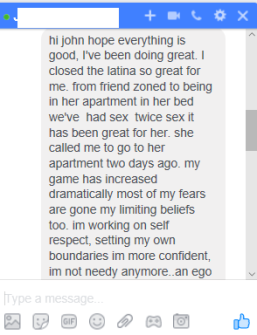 First one is my camera man. He pulled a girl back to her place. So I guess that puts him finally into the 75%.

This other student was trained by a tall Filipino Asian guy in Cali. Who teaches more natural and direct RSD concept like trash. This student paid $2600 and didn’t get a single phone number. So this instructor was a laughing joke to other dating coaches. I took this student under my wing and now he has his first date. Although it took a while, he finally got here.

Nothing is impossible with my teaching ability. No matter how much the odds are against you. While my prices will go up soon. I am making new announcements. I have merged with a big company with two of the worlds best daygamers. Stay tuned.

I am coining a new classification. I can teach hardcases. But I found a new category of people who can’t learn daygame to save their lives. They often dwell at places like PUA hate sites. Instead of blaming their mental illnesses, they blame PUA and women’s shallow LMS behavior. I cracked the code and figured them all out. It was so clear now when I think about it. I made a video about mistakes opening a set. It seems all my students or all three of them seems to display traits of high functioning autism, or Asperger Syndrome.

Yes, all impossible cases are socially retarded because they are autistic. They get angry at women and their vibe sucks. They start to have limiting beliefs about dating. No matter how hard they try to learn, they can’t apply PUA material. Since a lot of daygame involves conversational skills or social skills. So what happens is they blame everything else, for their circumstances. They are stuck in a state of learned helplessness. Then they have limiting beliefs created from the bottleneck of social skills. So they use confirmation bias like see, see, I told you so. Now their entire belief system is fucked. On top of Asperger, they have the sociopath gene, depression and anxiety. Being able to implement things fast means you are going to improve faster. This type of skills shows if you are an easy case, normal case or hardcase, impossible case. Impossible cases can’t implement what they learned.

Solution, learn social skills first. Focus on that before you learn game. I don’t mean be platonic around women. What I mean is get the basics down and then apply game over it later. Or you become a weird PUA. Conversation skills are very important, being a PUA. Second, stop thinking so much, if your mind is fucked. Just do what I say, after you get social skills handled. Work on eye contact and outer game, tonality.

More following this week. You would also see a short 5’7 Spanish guy f-closing a 6’2 blonde. Also, A guy from Asia, the Philippines specifically who also got a same day lay. Few other pulls. His life transformed. Stay tuned.