I HAD A RETARDED SOUNDING KAIZEN STUDENT.  MORE DAYS LEFT. HE FAILED SOME OF THE DAYS OVER AND OVER. I TOLD SEVERAL MEMBERS OF THE INNER CIRCLE WHO LOST THEIR VIRGINITY TO CALL HIM OUT 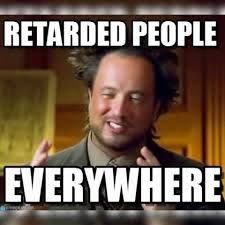 I wrote he was the worst student of the year.

He had to do a tonality exercise.

The way he talks up and down, his tonality or notes, he sounds retarded.

At the end of the class, he tried to say Viet people talks retarded.

NO I TAUGHT TONS OF THEM, NONE SOUNDS LIKE HIM.

They are quiet, offended, but not retarded.

He sounds retarded, autism to the max. Maybe Aspergers tonality mixed with autism.

That’s what they sound like, spitting out stupid game lines.

IF YOU HAVE HIGHER SMV THAT’S FINE, IF YOU HAVE LOWER SMV, WHY TALK LIKE THAT?

AT THE END OF THE CLASS HE GOT WORST….

YOUR TONALITY IS BETA, YOU DON’T EVEN KNOW IT

The student can never get her to hot traffic, he always turns it cold since he sounds like he is deep throating a dick when he talks at full speed.

When you put women on a pedastal, you will uptalk.

ITS NOT JUST GOD DAMN UPTALK LIKE RED PILLED SHIT

LIKE OH STAY NEUTRAL OR DOWN TALK, NEVER UPTALK…

I had an Indian student that got angry at me even if I got him a few lays.

I tried to tell him his tonality sucked.

I recorded it, he sounds butthurt, narcissistic.

I also had another Asian student 60 lays tinder.

He kept putting women on the pedastal.

That is what happens if your mom is crazy… she yells at your beta dad, so you adopt so much respect for women you put her on the pedastal.

JOCKO HAS A DECENT TONALITY FOR DOWNTALK. GET THIS NEUTRAL, THEN DOWNTALK FIRST. THIS IS LEVEL 1

He downtalks since he is a Navy Seal commander. I downtalk too. I’m John Elite… the guy with the most daygame student results in the world…

HE TALKED LIKE A LEADER, A BOSS, NOT AN EMPLOYEE. HIGH VALUE, NOT LOW

Also the student started to make excuses all day.

I forced him to read extreme ownership, he lied about reading 3 chapters.

I mean my students yelled at him to wake him up.

If he is unteachable, then I don’t need to put so much effort into it.

I should raise the price of Kaizen.

THIS IS THE SECOND LEVEL. IF YOU CAN SOUND LIKE THIS, YOU WILL REACH A LEVEL OF MASTERY. YOU WILL SOUND LESS LIKE AUTISTIC PUAS, BUT CAN FIT INTO A TRIBE LIKE EVOLUTIONARY PSYCHOLOGY

When that student tried it, this was like drifting a car

He did it backwards.

What goes up in tonality, he goes down.

MAYBE ASPERGERS, THEY HAVE WEIRD TONALITY. EITHER MONOTONE OR SCREECHY UP AND DOWN.

IT WAS THE LATTER

It was a trainwreck. He did that for 6 weeks sending me samples.

I even play his infield to the inner circle, just to show how retarded it was.

What not to do.

THIS WAS ONE OF THOSE DAYS WHERE I PRAY TO GOD, PLEASE GET ME THOUGH THIS CLASS. IT WAS THAT BAD.

IT OFFENDS MY OTHER STUDENTS HE IS THAT STUPID.

ITS LIKE BILL GATES TEACHING HIM, AS ONE OF MY STUDENTS SAID, THEN HIM RESISTING IT…

If he isn’t teachable, just maybe teach him, don’t expect anything…

I TAKE THIS LEAVE NO SOLDIER BEHIND CONCEPT TOO FAR.

He needs to be left behind.